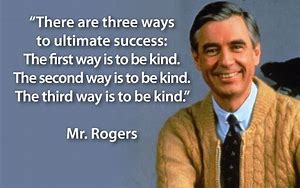 Give yourself the gift of inspiration this season with A Beautiful Day in the Neighborhood movie. With so much incivility in society and in the workplace, Fred Rogers provides a muchneeded model of kindness. This drama has meaning and depth, eliciting both laughter and tears. It is based on the true story of Fred Rogers helping a jaded magazine writer overcome his skepticism and learn about kindness and forgiveness.  Don’t just take it from me; Rotten Tomatoes gave the movie a 95% positive rating.

A friend of mine initially thought she didn’t want to see it since she already saw the documentary and didn’t want to see anyone but Fred play Fred. But Tom Hanks did a masterful job once he mastered slowing down his fast-paced style to Rogers almost overly thoughtful and slow-paced style.  It is a chance to see how Fred Rogers was in real life with adults, including a behind the scene view of comedy and conflict on the studio set.  Plus there are some clever artistic elements thrown in.

As a bit of a Fred Rogers geek, I loved reading the articles and seeing the interviews leading up to the movie.  Here is a link to the original 1998 Esquire Magazine article written by Tom Junod, which is the inspiration of the story.  Significant parts of the article are reflected in the movie, including a scene where adults and children of all ages on a subway broke out into spontaneously singing It’s A Beautiful Day in the Neighborhood.

More interesting background is this University of Pittsburgh article about how Fred Rogers was influenced and mentored by child psychologist and Pitt faculty member, Margaret McFarland.

Here is a link to Fred Rogers quotes from my last article about him: What Would Mister Rogers Do?

What Would Mister Rogers Do?

What Are You Going to Create Today? Plus a Birthday Story.

Forgiveness is for You!
Scroll to top